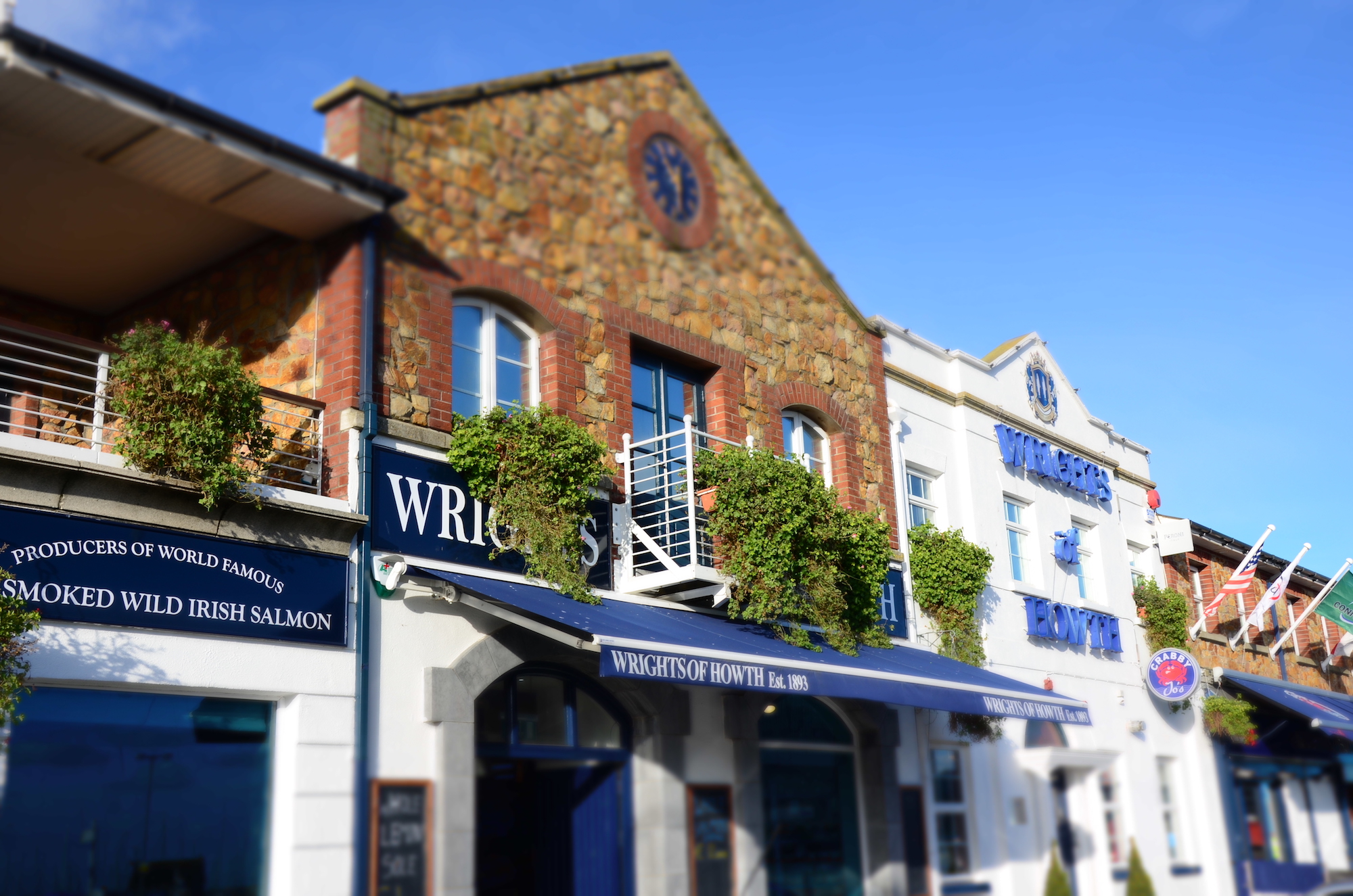 Dublin is blessed with a remarkably scenic coastline and within mere minutes of the bustling heart of the city, it is possible to find yourself captivated by both tranquil scenery and breathing in the salted air of Irelands ancient maritime history. A mere thirteen kilometers north east from the city, the Howth peninsula forms one of the most remarkably beautiful landmarks to be found anywhere in Ireland. Now the home of Irelands most affluent, Howth was originally colonized by a band of Vikings fleeing the fall of their Dublin stronghold in the 11th Century, and it is from the Old Norse for ‘headland’ that it derived its unusual name.

Heading east from the city centre, it is possible to follow a cycle path that winds its way along the quayside of the Liffey and the IFSC, or Dublin’s financial quarter. The cycle paths unfortunately disappear for the next kilometre or so as the route turns northwards through some poorly surfaced roads through East Wall. Not one of Dublin’s prettier areas, East Wall nevertheless has a surprising if sordid history, once known as Monto, a red light district celebrated in a song made famous by the Dubliners, though nothing survives now for a sightseer to pause for, nor even slow down. In no time Clontarf strand is encountered, and from here on its plain sailing for a cyclist of any level as there is a near continuous cycle path separated from the traffic for almost the next 10km.

As well as wonderful scenery, the Clontarf boasts a number of popular bars and restaurants, and there is even a bike shop if you run into any problems. There are the options of a number of possible sightseeing detours along the route. Dollymount strand is Dublin’s most popular beech front, and St Anne’s Park was the location of the Battle of Clontarf in 1014, when the Vikings rulers were driven from Dublin by a rising of Irish Chieftains. A little further along, St Fintan’s Cemetery in Sutton is the resting place of rock legend, Phil Lynott.

Taking a spin to Howth on a sunny day and enjoy some seafood is just fantastic!

On reaching Sutton Cross, the cyclist is presented with a choice of routes. Either continue onwards, and find yourself rolling into the historic fishing village of Howth without much undue effort. Or alternatively, turn right and follow the headland, which includes a small number of fairly sharp inclines, but rewards the more intrepid cyclist with scenery as breathtaking as the climbs. Some of Irelands most desirable residences are encountered during this meander around the headland, leaving many a visitor as much agape of the architectural grandeur as the extraordinary view back towards the southern flank of Dublin Bay. The climb around the headland can be thirsty work, and a quick pint in the Summit Inn is reward enough for the effort of getting up the hill, before hurtling down the last stretch into Howth village. (Its a short but very steep descent, so remember to check your brakes before you let loose.)

After enjoying some time in Howth, a tired cyclist can simply hop on the train (http://www.irishrail.ie/about-us/dart-commuter) and be back the city centre in thirty minutes. (Dart services will accept bikes free of charge provided they are not an inconvenience to other passengers. IE not during morning or evening rush hours, or in large groups) 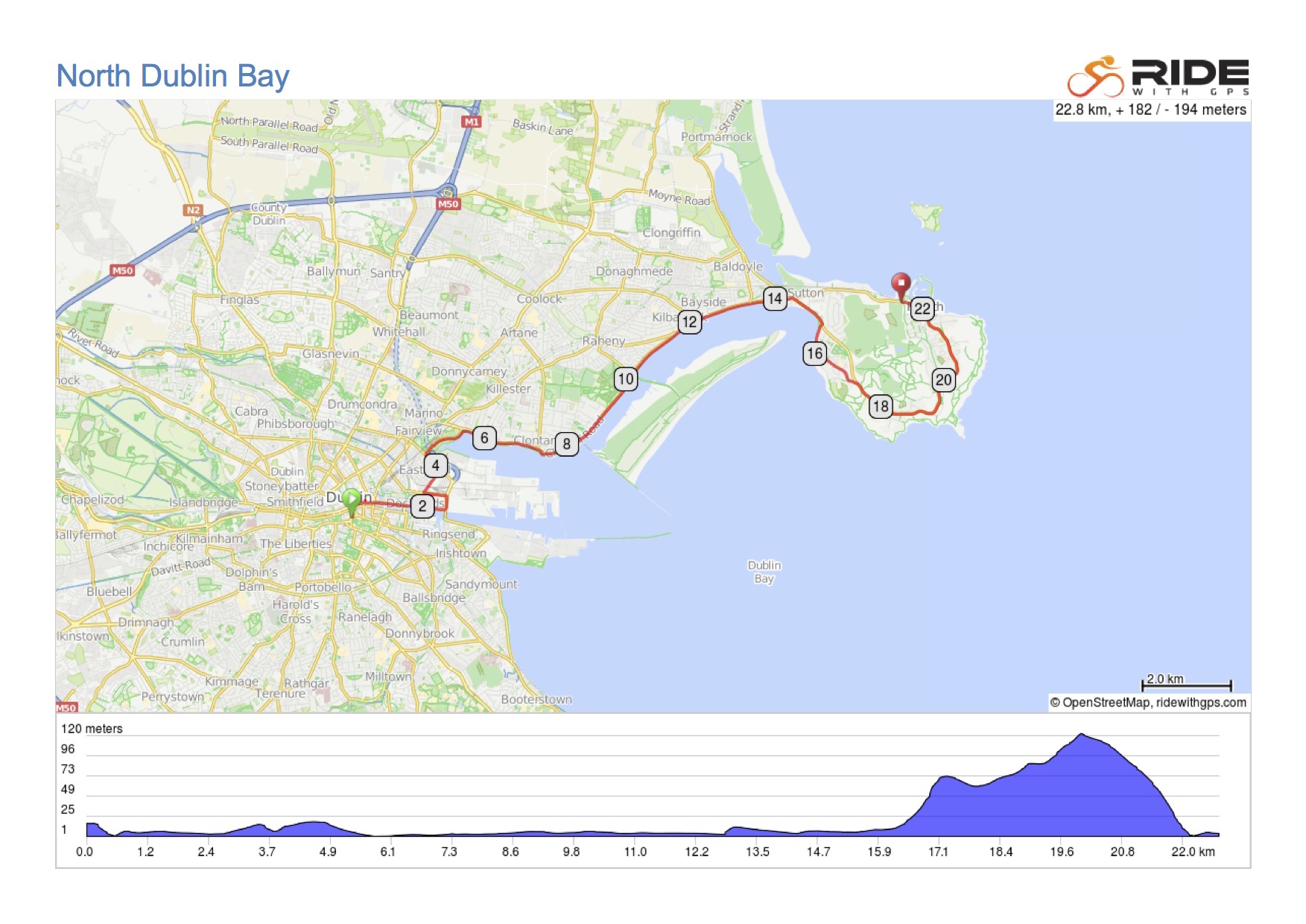 Things to do and see